A NOTE FROM BARB NEUBERT AND CARLA BLUMBERG

In the early 1990’s Barbara Neubert bought an old trailer and converted it into a traveling espresso shop. That was the beginning of At Sara’s Table. The name came from a novel Barb had written when she was recovering from a long illness. For a couple of summers she and her partner Mary Ann Rish traveled around Minnesota and Wisconsin to events and fairs and began to build a reputation. Eventually, the couple decided they wanted a more permanent home. A small space in a building that had been a restaurant in the ’20s and ’30s was available in the 700 block of East Superior Street in Duluth and Barb rented it. With a very small budget they converted it into a cozy coffee and book shop.

Eventually Mary Ann left the business and Barbara developed a new partnership with Carla Blumberg, who had come to Duluth from Texas. Carla had owned a restaurant in Austin and believed that the coffee shop could be successful in a larger venue with an expanded menu. By chance Barb happened to see a for sale sign on the old Taran’s Food Market and the couple bought it.

Barb and Carla chose Holm Construction for the restaurant project because they had been willing to build the Duluth Women’s Building. The couple worked with the contractor and did a lot of demolition and salvaging of lumber that was to be used in the new building. The wooden ceiling in the front dining room is made with boards from an old walk-in cooler that was in the grocery basement. The tin ceiling in the rear dining room is from the original ceiling found above the suspended grocery ceiling. The booths, tables, wait-station and bookshelves are all made from salvaged lumber.

The restaurant opened in late 2002 and has become a fixture in the Chester Park Neighborhood. Getting a new business off the ground is difficult and the early days were rugged but now operations are smoother. Ever since the beginning the business has wanted to use products that are locally and seasonally produced to hand make healthy and delicious food from scratch. There have been many willing hands helping out over the years. Worthy of mention are:

Bruce Wallis – who for many years headed up the dinner service

And many, many others to whom Barb and Carla are grateful. 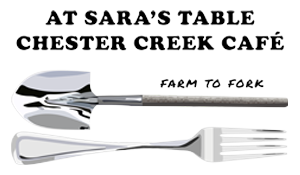